April 06, 2012
The World Economic Forum’s Centre for Global Competitiveness and Performance through its Global Competitiveness Report and report series, aims to mirror the business operating environment and competitiveness of over 140 economies worldwide The report series identify advantages as well as impediments to national growth thereby offering a unique benchmarking tool to the public and private sectors as well as academia and civil society. The Centre works with a network of Partner Institutes as well as leading academics worldwide to ensure the latest thinking and research on global competitiveness are incorporated into its reports.
The Global Competitiveness Report 2011-2012, comes out amid multiple challenges to the global economy and a continuing shift in the balance of economic activity away from advanced economies and toward emerging markets. Policymakers are struggling to find ways to manage the present economic challenges while preparing their economies to perform well in an increasingly complex global landscape and the report offers a unique tool in addressing some key issues.

This year’s report findings show that Switzerland tops the overall rankings. Singapore overtakes Sweden for second position. Northern and Western European countries dominate the top 10 with Sweden (3rd), Finland (4th), Germany (6th), the Netherlands (7th), Denmark (8th) and the United Kingdom (10th). Japan remains the second-ranked Asian economy at 9th place, despite falling three places since last year.
The Global Competitiveness Report 2011-2012: Country Profile Highlights
Top 10
As in previous years, this year’s top 10 remain dominated by a number of European countries, with Sweden, Finland, Denmark, Germany, and the Netherlands confirming their place among the most competitive economies. Singapore continues its upward trend to become the second-most competitive economy in the world, overtaking Sweden, while the United Kingdom returns to the top 10 as it recovers from the crisis.
Malaysia gains five ranks to reach 21st position, registering improvements across the board. The country’s progress is particularly noteworthy in the institutions and macroeconomic environment pillars, as well as in several measures of market efficiency. Among the prominent advantages of this strong and consistent performance are its efficient and sound financial sector— which places among the world’s most developed, just behind Singapore and Hong Kong—and its highly efficient goods market, ranked 15th. In addition, its macroeconomic situation has improved markedly over the past year to reach 29th place, even though the country continues to run a budget deficit of about 5 percent of GDP. As it moves toward becoming more innovation driven, Malaysia will need to improve its performance in education and technological readiness. In the latter dimension, the country places a low 44th, with room for improvement in technological adoption by both businesses and the population at large. In terms of higher education and training (38th), improving access remains a priority in light of low enrollment rates of 69 percent (101st) and 36 percent (66th) for secondary and tertiary education, respectively. 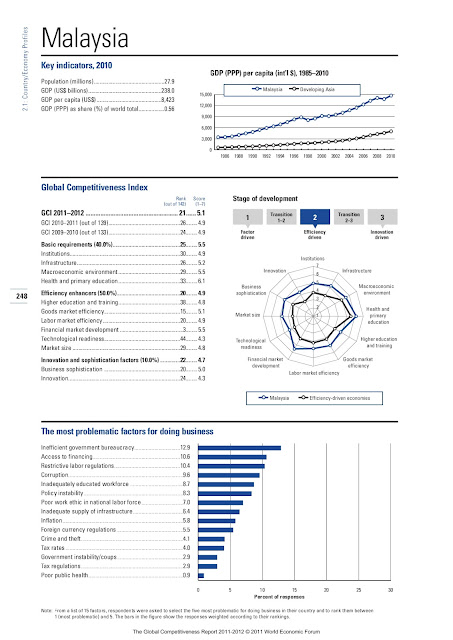 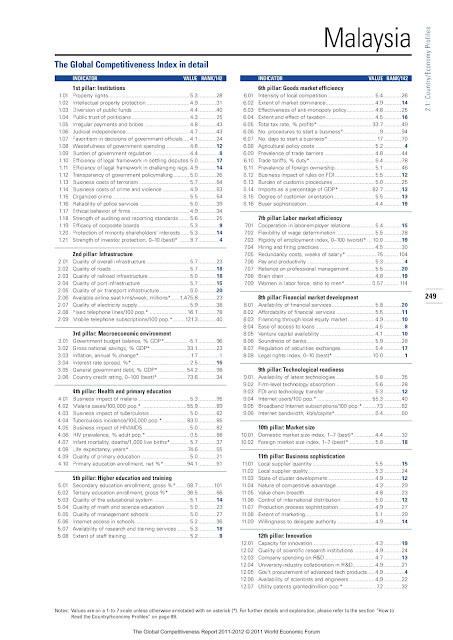 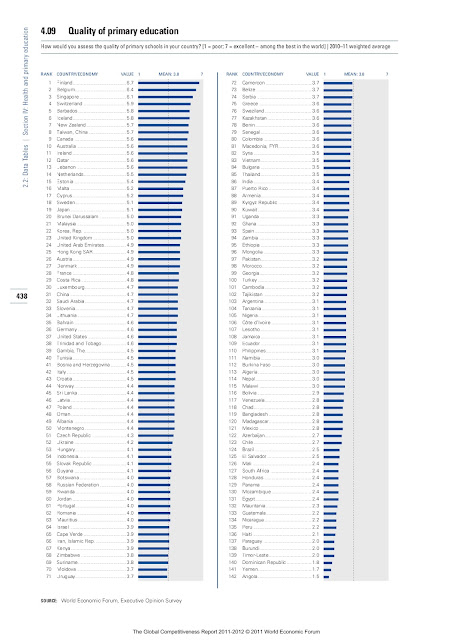 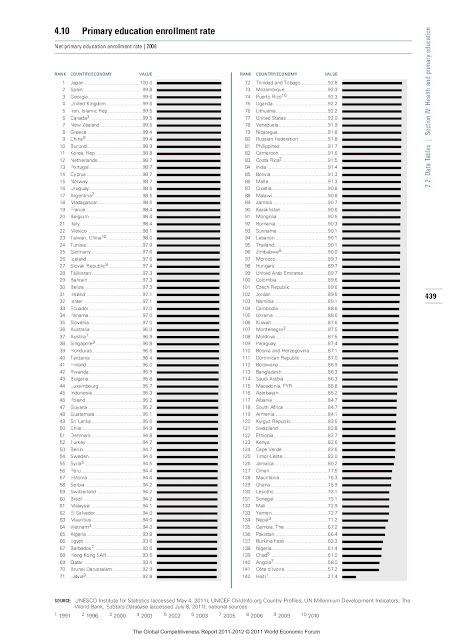 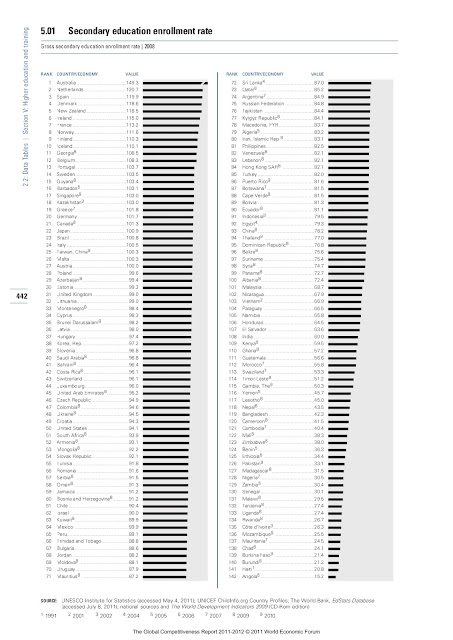 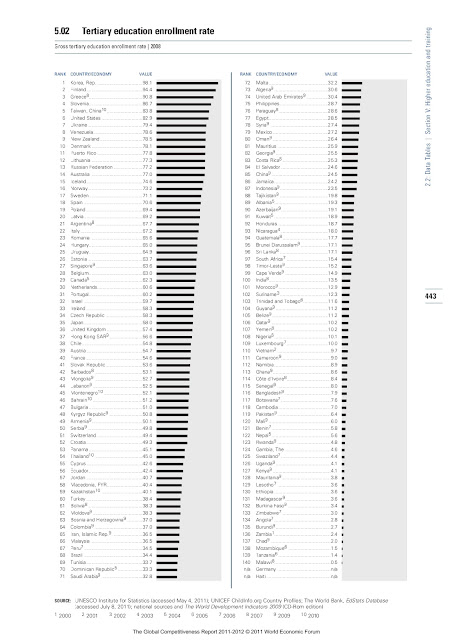 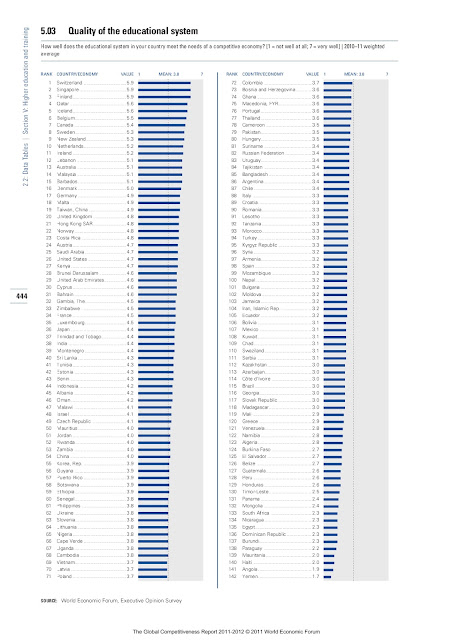 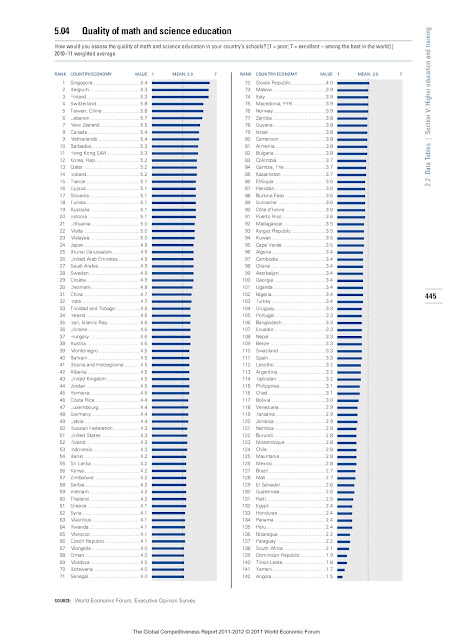 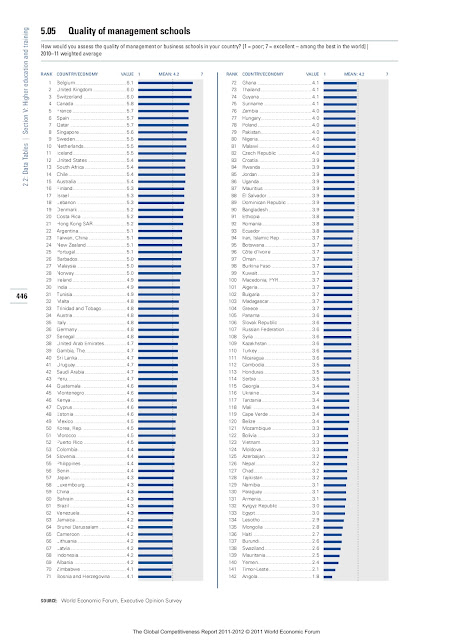 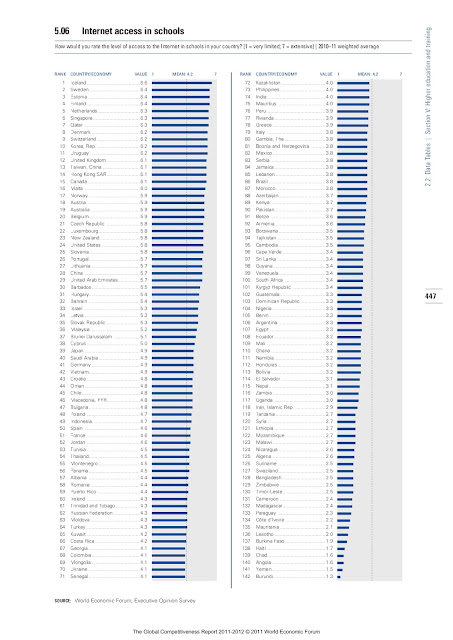 The Global Competitiveness Report series has evolved over the last three decades into the world’s most respected assessment of national competitiveness.  This year’s Report comes out amid multiple challenges to the global economy and a continuing shift in the balance of economic activity away from advanced economies and toward emerging markets.  Policymakers are struggling to find ways to manage the present economic challenges while preparing their economies to perform well in an increasingly complex global landscape.
The present context makes it more important than ever for countries to put into place the fundamentals underpinning growth and development.  The Global Competitiveness Report 2011 – 2012 contributes to this process by providing a detailed analysis of the productive potential of nations worldwide.  The Report offers policymakers, business executives, and academics, as well as the public at large, valuable insights into the policies, institutions, and factors that enable robust economic development and long-term prosperity.
Produced in collaboration with leading academics and a global network of Partner Institutes, The Global Competitiveness Report 2011 – 2012 offers users a unique dataset on a broad array of competitiveness indicators for a record number of 142 economies.  The data used in the Report are obtained from leading international sources as well as from the World Economic Forum’s annual Executive Opinion Survey, a distinctive source that captures the perceptions of several thousand business leaders on topics related to national competitiveness.
The Report presents the rankings of the Global Competitiveness Index (GCI), developed by Professor Xavier Sala-i-Martin and introduced in 2005. The GCI is based on 12 pillars of competitiveness, providing a comprehensive picture of the competitiveness landscape in countries around the world at different stages of economic development.  The Report also contains detailed profiles highlighting competitive strengths and weaknesses for each of the 142 countries featured, as well as an extensive section of data tables displaying relative rankings for more than 100 variables.
The Report also features discussions on selected regions and topics.  These include an analysis of the effects of debt crises on competitiveness, a review of the innovation challenge for Latin America, and competitiveness trends and prospects for sub-Saharan Africa.  An important addition to this year’s Report is a chapter describing the World Economic Forum’s preliminary work aimed at integrating the concept of economic, social, and environmental sustainability more fully into its competitiveness research – WEF.
Source:          http://www.weforum.org/issues/global-competitiveness